In late May, the Mesulam Center hosted the end of year celebration for the Buddy Program, a program that matches persons living with dementia with first-year medical students for a year. Now in its 24th year, the largest cohort in the program’s history gathered online via Zoom.

The program has been such a success, in part due to the support of Glen and Wendy Miller. Their family’s continued commitment to the Buddy Program has allowed the program to endure and support the building of intergenerational relationships, while expanding a medical student’s knowledge of dementia.

At the end of year celebration, students and their mentors shared highlights of their year connecting through phone calls, Zoom sessions, and when it was safe to do so, some met in person. 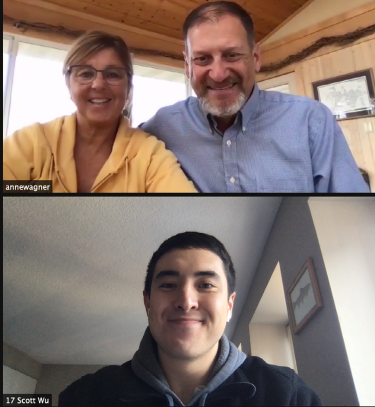 Rising second year medical student Scott Wu said his year in the Buddy Program has impacted his future as a physician. Scott joined the Buddy Program to experience continuity of care for an individual. He was also interested in joining the program due to his grandmother’s diagnosis of Alzheimer’s, although he wasn’t able to spend much time with her because she lives in China.

Scott was matched with Steve, who is living with primary progressive aphasia (PPA). Throughout his first year of medical school, he met every other week with Steve. In their sessions, they discussed their mutual interests of technology, business, and politics.

The virtual nature of the Buddy Program this year allowed the center to open it up to individuals across the country living with dementia. Steve and his wife Anne live in Minnesota, but were able to connect bi-weekly with Scott through Zoom. In March, they drove to Chicago and were able to meet Scott for a walk along Lake Michigan.

“My meetings and time with Steve showed me how much I value continuity of care from a provider perspective,” Scott said. “More specifically, I came to appreciate the trust, friendship, and teamwork that developed between the two of us.” 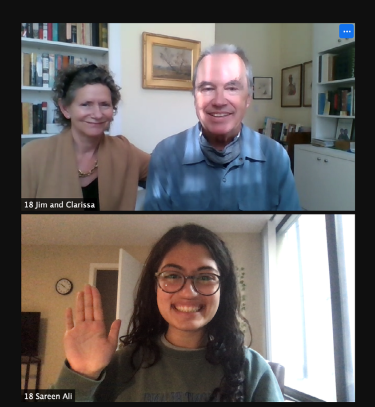 Sareen Ali, a rising second year medical student, got involved with the Buddy Program because she wanted to gain more knowledge about a person’s experience with dementia. In high school and in her undergraduate years at the University of Pittsburgh, she worked in a neurobiology lab in Pittsburgh doing research. “I had the experience on a microscopic level, but I wanted to understand the bigger picture.”

Sareen was paired with Jim, who is living with Alzheimer’s disease. She and Jim met every other week over Zoom to discuss poetry or movies they recently watched. In March, she was able to meet Jim and his wife Clarissa and walk with them around their neighborhood.

“It was such a privilege to learn about Jim’s life and share in his passion of poetry,” Sareen said. “The program raised my confidence in patient-care and building relationships.”

In September, the center hopes to host a gathering for all this year’s participants in the Buddy Program.